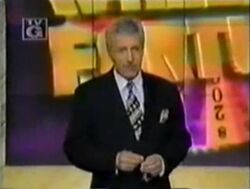 Prior to becoming a game show host, he worked as a broadcaster at CBC. While Pitfall is generally considered by fans to be underrated, Alex noted at times that it was the only time he was "stiffed" for his salary (the production company went bankrupt during the show's run and couldn't pay later winners) and kept the bounced check framed in his office.

"I was the guest host for an entire week once. And I must have done such a good job that the producers couldn't wait to ask me back, and so here I am today...sixteen years later."

Trebek's first association with Wheel came in August 1980, when series creator Merv Griffin asked him to fill in for Chuck Woolery after Chuck failed to show up (a very odd event, since he had a habit of arriving early).

In August 1985, Trebek returned to the daytime show to fill in for Pat Sajak for a single episode, although the circumstances are unknown. Trebek also hosted on April Fool's Day 1997, when Pat and Vanna White played for charity; Pat hosted that day's Jeopardy!

On the November 12, 1999 episode of Wheel of Fortune during their road show at Madison Square Garden in New York City the Round 2 Puzzle was BE SURE YOUR RESPONSE IN THE FORM OF A QUESTION, and after being correctly answered as being from Jeopardy!, Trebek would appear on the stage to promote an upcoming week of Celebrity Jeopardy! which was also held at MSG.

Trebek competed on a special episode (November 2, 2000) in which he, Tara Lipinski, and Richard Simmons played in Halloween costumes for charity and an "unmask the stars" sweepstakes. Trebek was disguised as a gnome, and following the Bonus Round his son Matt appeared onstage in a gnome costume.

Trebek frequently appeared in publicity shots with Pat and Vanna, and in 2011, received a Lifetime Achievement Award along with Pat.