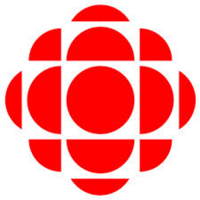 CBC (short for Canadian Broadcasting Corporation) is a network which debuted on November 2, 1936 and expanded to television on September 6, 1952. The network is owned and operated by the Canadian government, and as a result the budget is supplied by taxpayers.

The Corporation began suffering budget cuts in the late 1980s, which apparently tapered off sometime after 1992 only to return around 2010. One such cut resulted in CBC dropping the iconic theme of network staple Hockey Night in Canada, while another in 2012 included laying off hundreds of news personnel.

CBC became the official provider of Wheel and Jeopardy! to Canada beginning in September 2008. Wheel celebrated the acquisition with a Canada Week on October 13 (also the week of Canadian Thanksgiving), with country native Alex Trebek giving a pre-recorded fact about Canada from the Jeopardy! board after Round 1, with the Canadian flag and Wheel of Fortune logo present (on the monitors normally used for the Final Jeopardy! category and clue, respectively). Coincidentally, Trebek used to work at CBC as a broadcaster before becoming a game show host.

Bizarrely, this celebration did not extend to allowing Canadian residents to have SPIN IDs, resulting in all SPIN ID-related items being covered on Canadian airings by a red graphic reading "Open to U.S. residents only". CBC also edited out the sponsor plugs, and at the beginning of Season 27 began removing the Jackpot plugs and the announcer's comment before them (minus one instance of the latter on March 16, 2012).

As the Corporation suffered further cuts in the 2011-12 season, by the beginning of May the annual $40,000,000 fee for Wheel and Jeopardy! became an expense that CBC could no longer afford. As a result, the network announced on May 10 that it would be dropping the two games from its schedule. (Apparently, CBC paid such a large price solely to boost ratings and lead that audience into their primetime lineup.)

Less than a month later, CHCH in Ontario picked up both games to begin airing September 3.