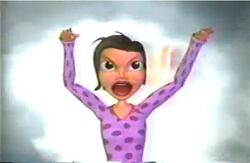 Cyber Lucy was the CGI hostess/announcer of Wheel 2000, played by Tanika Ray through a motion-capture system (Lucy's movements are Tanika's).[1] Lucy was designed by Don Shank and was likely named after Lucy Johnson, then the head of daytime/children's programming at CBS.

Despite not being a real person, Lucy had a biography on the show's website.

A tough-as-nails wide-eyed dancer and actress, Lucy was born into a family that dabbled in the arts (her mother Mabel was a cartoon stuntwoman). Growing up in the shadow of the entertainment industry and the computer world as a child of the information age, and despite being a top-notch student with a natural instinct for computer science, she was drawn to the glamour of show business.

In late June or early July 1997, on a whim, she decided to "beam out" to Los Angeles and immediately won over the employees of Scott Sternberg who were developing Wheel 2000.

Interestingly, Lucy appears to have based her style on that of Susan Stafford. Like Susan, Lucy knew the puzzles and their letter frequencies, sometimes yelled out encouragement to the players, and was very "physical" in her work (namely, moving around in some way when on-camera); unlike Susan, she did not interact directly with the puzzles themselves (barring one known instance of sitting on top of a letter) due to the letters being revealed automatically.

Also like Stafford, Lucy was more of a co-host than Vanna White: other than interacting with David Sidoni, she asked the day's contestants questions during their interviews, read off the category choices, announced the names of home viewers if the www.Wheel2000.com wedge was landed on, informed the contestants if their letter choice was in the puzzle (and if so, how many), explained some puzzles after they were solved, and read the fee plugs at the end of the show.

Lucy made a cameo appearance on the November 4, 1997 episode of Jeopardy!, where she presented the $100 clue of the category "Cyber Life".[2]

Wheel 2000 was Lucy's first television role...and, so far, it is her last. While her contributions to the American Wheel of Fortune are little more than a footnote, she had two known successors: one on Turkey's Cark 2000 in 2000, the other on Vietnam's Chiếc nón kỳ diệu from at least 2007-09.