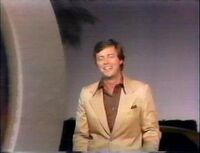 Edd Byrnes (born Edward Byrne Breitenberger; July 30, 1933 - January 8, 2020) was an actor best known for his role as Gerald Lloyd "Kookie" Kookson III on the 1958-64 series 77 Sunset Strip. Byrnes was the second host of Wheel of Fortune, taping the second and third pilots for NBC on August 28, 1974, and the first host under its more familiar title (Chuck Woolery hosted the 1973 pilot, Shopper's Bazaar).

His autobiography, Kookie No More, was published in 1996. Part of the book details his bout with alcoholism, which had lasted from about 1959-82.

Byrnes' childhood was generally impoverished and unhappy, a time shared with brother Vincent and sister Jo-Ann. Their mother worked various jobs to keep the family together, primarily because her alcoholic husband was often absent. In 1946 or 1947, when Edd was 13, his father was found dead in a basement.

After this large loss, Byrnes dropped his last name and adopted "Byrnes", based on the name of his maternal grandfather (a New York fireman). In his early years, Edd found escape from family problems at the movies and at the gym, where he developed an athletic body; this desire to be fit backfired in the late 1940s while he was a taxi driver, as he was fired for doing push-ups during his break.

At age 17 (1950 or 1951), Byrnes was approached by a man who offered to take free "physique" photos of him. In Kookie No More, Edd recounted that this led to several years of "hustling" older, well-to-do men despite the fact that Byrnes was heterosexual. One of these men acted as a mentor, introducing Edd to fashion and culture and encouraging his hopes for an acting career.

After doing some Summer-stock work and a few bit TV parts, Byrnes drove to California in 1955. After arriving in Los Angeles, Edd managed to get a few minor parts in films before being cast in the 1958 movie Girl on the Run, which had a brief theatrical run in the Caribbean before airing on ABC in October of that year.

Byrnes' role in Girl on the Run was that of a serial killer who constantly combed his hair. Although his character went off to prison to be executed, Edd proved so popular with the audience that he was recast in his more famous role when 77 Sunset Strip became a series. The second episode ("Lovely Lady, Pity Me"), broadcast the next week, began with a message from series star Efrem Zimbalist Jr. explaining that the character's fate in the pilot would be ignored.

Edd's popularity on the show led to quite a bit of fan mail - according to a 1961 Picture Magazine article, he was getting 15,000 letters per week.

The constant hair-combing became a source of humor among comedians of the era, and led to Byrnes (along with Connie Stevens) recording the novelty single "Kookie, Kookie, Lend Me Your Comb" in 1959. The song reached #4 on the Billboard Hot 100 (the first hit single for the recently-established Warner Bros. Records), and stayed on the charts for 13 weeks; it also appeared on Byrnes' album Kookie.

Edd walked off 77 Sunset Strip early in the 1959-60 season, demanding a larger part and higher pay. The producers eventually agreed, and Byrnes returned in May 1960 as a full-fledged partner in the detective firm.

During this time, Edd appeared in the Warner Bros. films Darby's Rangers (1957), Marjorie Morningstar (1958), Up Periscope (1959), and Yellowstone Kelly (1959). Byrnes also tested for the role of John F. Kennedy in the 1963 movie PT 109, a role that eventually went to Cliff Robertson (selected, as with all aspects of the film, by the President himself).

After 77 Sunset Strip ended, Edd played in several films including Roger Corman's The Secret Invasion (1964) and Beach Ball (1965), then traveled to Europe for several spaghetti westerns.

Byrnes also appeared on several game shows during this period: on July 29, 1963, he was a celebrity guest on Stump the Stars, followed by being a panelist on The Celebrity Game (May 3, 1964). For the week of December 13-17, 1965, Edd played on NBC's The Match Game along with Florence Henderson. In 1972, he appeared as a bachelor on The Dating Game, but the outcome of this game (known to have been aired by GSN) is not known.

Following the disaster of Shopper's Bazaar, NBC suggested Byrnes when Merv Griffin returned to the network with an overhauled format in 1974. While Edd had never hosted a game show before, this was not considered a problem.

In Kookie No More, Byrnes admitted that he was drunk during the pilots because he was "scared to death" about doing Wheel. It is possibile that he intended to drink a little to calm his nerves (a tactic done quite frequently in show business), but his alcoholism led to him taking it too far.

"No don't guess, it's too early! Look at all the money you can make, you can make thousands of dollars! Be a gambler!" (Edd's response to a player who wanted to solve the puzzle MOTHER GOOSE with only three letters showing, essentially bullying her into spinning again.)

Edd's intoxicated state was very visible on both pilots: on the first taping, he made faces at the camera; on the second, he made a variety of noises as the Wheel spun. Byrnes also said various odd phrases including "Spin the puzzle and solve the Wheel.", made it obvious that he was reading from cue cards, and during his first pilot went so far as to bully contestant Roseanne into spinning again during Round 3 by yelling the above quote (long believed to have been "No! You only have $300! You can't solve yet!"). Comparison of his pilots would appear to indicate that, to Byrnes' credit, he sobered up a bit during the break between them.

Test audiences claimed that Edd simply did not fit and was mean to the contestants, and it has been rumored for years that he was caught reciting his vowels backstage by Merv (which, if true, Byrnes' attempting to remember which letters were vowels was very likely a side effect of his intoxication). Following the taping, he was confronted by an upset Susan Stafford.

Byrnes' career was unscathed from Wheel, since the public at large did not see the pilots. He continued to appear in various TV and movie parts, including Vince Fontaine in the highly-successful movie Grease (1978), the Emcee on $weepstake$ (1979), and Ross Coleman in Troop Beverly Hills (1989).

For the week of May 14-18, 1984, Byrnes appeared for a "Salute to the Fifties" week on The Match Game-Hollywood Squares Hour.

Edd retired in 1999, shortly after playing Bobby Icovella in the TV movie Shake, Rattle and Roll: An American Love Story.

After walking off of 77 Sunset Strip in late 1959, Byrnes began to drink heavily. He also visited a psychiatrist who administered drugs to him, which only made things worse.

Around 1981, Byrnes reunited with old friend Troy Donahue to help each other get sober, which happened in 1982.

Edd passed away on January 8, 2020 in his home in Santa Monica, California. The cause is uncertain, though his son Logan has suggested that it may have been a stroke.