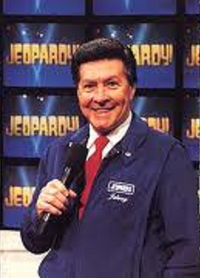 John L. "Johnny" Gilbert III (born July 13, 1924 from Newport News, Virginia) is a television announcer most famous to game show fans for being the announcer of Jeopardy! since its second pilot in 1984 (also doing the brief 1990 Super Jeopardy! run). Still, he has several connections to Wheel of Fortune.

One of Gilbert's first announcing jobs was the original (1961-62) version of Camouflage, hosted by Don Morrow; Johnny filled-in at least once, on January 8, 1962. Outside of Jeopardy!, he may be most famous as announcer of the original Bill Cullen version of The Price Is Right for its ABC run (1963-65), filling-in for Bill at least once. He also announced on Barry & Enright's The Joker's Wild (1972-75/1977-86) and Tic-Tac-Dough (1978-86), often filling in for Charlie O'Donnell, Jay Stewart, or Johnny Jacobs.

He contributes to the Hasbro Interactive/Infogrames Jeopardy! video games by reading the clues, instead of Alex Trebek.

Gilbert is known to have filled in for longtime announcer Jack Clark when he was unavailable, then filled the same role for the weeks of November 27 and December 4, 1995 because Charlie O'Donnell was ill.

Shortly before O'Donnell's death in November 2010, Johnny was rushed in as a last-minute replacement for the weeks of November 1 and 15. He also announced the week of November 8 in post-production, following a decision that the eight as-yet-unaired weeks announced by Charlie before his death would have him dubbed over by someone else.

Johnny also made a guest appearance on the April Fools' Day 1997 episode, doing part of the intro with Charlie and using Jeopardy!'s "now entering the studio are today's contestants..." intro while Pat Sajak and Vanna White (who played the game that day, with the former hosting Jeopardy! in return for Alex Trebek hosting Wheel) walked onstage.