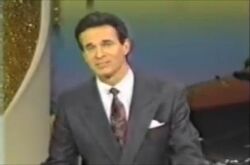 Michael Gary "M. G." Kelly (born 1952 from Ada, Oklahoma), aka "Machine Gun" Kelly, is a disc jockey who not only hosted several radio shows (including Live from the 60s), but appeared on several episodes of Too Close for Comfort and had his own syndicated variety show. He was also announcer on The Pop 'n Rocker Game (1983-84), hosted by Jon "Bowzer" Bauman.

In late July or early August 1988, Kelly taped his first episodes as Wheel announcer following the death of Jack Clark, performing these duties on both daytime and nighttime. His first nighttime show aired September 5, and he is believed to have only missed ten episodes (the nighttime weeks of November 14 and 21, done in New York City with Don Pardo announcing).

Kelly had a very low-key delivery and ad-libbed around the copy far more than any of the show's other announcers, most notably when describing the $25,000 cash prize in the Bonus Round. Perhaps due to this, he was among those who auditioned to replace Pat in daytime.

Kelly was dismissed from both versions following the February 17, 1989 shows, with original daytime announcer Charlie O'Donnell returning the following Monday. Based on available tapedates, the switch likely occurred during a Christmas/New Year's taping break; the reason for Kelly's dismissal was very likely because, despite (or perhaps because of) his constant ad-libs, he often required multiple takes for prize copy.

Possibly due to his brevity, Kelly rarely appears in retrospectives. Notably, his reading of the slate for #S-1000 was shown on February 23, 2009 as part of that day's clip montage (one of four leading up to #S-5000), likely because the milestone was not actually mentioned in the episode itself.

Retrieved from "https://wheeloffortunehistory.fandom.com/wiki/M._G._Kelly?oldid=31905"
Community content is available under CC-BY-SA unless otherwise noted.