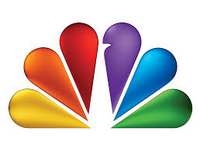 NBC (short for National Broadcasting Company) is a network created in 1926 by RCA whose symbolic Peacock, originally used to signify that a program was airing "in living color", has had many forms, including the 6-feathered rainbow Peacock that has been in use since 1986. The network originally consisted of two "arms", NBC Red and NBC Blue, the latter of which was sold off in October 1943 due to the FCC; in June 1945, the Blue Network changed its name to ABC. The "arms" themselves were the basis for the two-trapezoid "N" logo used from 1975-87.

Other logos include various microphones (from their days as a radio network), as well as a snake logo and a xylophone logo from which the symbolic G-E-C chimes are also a hallmark for the network; the chimes themselves represent the initials of the network's co-founder and eventual owner, the General Electric Company (the network is currently owned by Comcast, although NBCUniversal owns CNBC, MSNBC, USA Network, Bravo, and the Spanish-language network Telemundo). Interestingly, the G.E. Building is located not too far from the network's New York headquarters of 30 Rockefeller Center, also home to flagship station WNBC-TV as well as the long-running late-night staples Saturday Night Live, Late Night and The Tonight Show (Steve Allen, Jack Paar, and Jimmy Fallon eras). The network's Los Angeles headquarters, home to KNBC-TV as well as Tonight (Jay Leno and Conan O'Brien eras) are located at 3000 West Alameda Avenue in Burbank.

While NBC has had several high points (most notably its "Must-See TV" period from 1984-2004), it has also had several low points, most notably the reign of Fred Silverman (1978-81) and the late-night debacle (2009-10). While retaining several critically-loved shows despite failing in the ratings, the network as a whole has had ratings trouble since about the late 2000s and, in February 2013, fell to fifth place behind Spanish-language network Univision; one affiliate, tired of the low network ratings, pre-empted two hours of the Thursday-night lineup for an episode of Matlock which managed to score larger ratings than most of the network's shows.

Possibly the most notable thing from a game show perspective is that NBC owns all versions of Concentration, having bought it from Barry-Enright shortly after its 1958 debut; while Goodson-Todman was responsible for the 1973-78 and 1987-91 versions, they merely licensed the format from the network. For unknown reasons, NBC has done very little with the franchise; Game Show Network attempted to get the Goodson versions in the 1990s, to no avail.

The network is home to The Today Show, the longest-running morning TV news program. NBC has also covered the Macy's Thanksgiving Day Parade since 1952 and, as official broadcaster, is the only network with the rights to actually use the Macy's name.

In November 1974, after Lin Bolen had effectively killed Jeopardy! by moving it to 1:30 PM (during what was basically a game show version of CBS' "Rural Purge", getting rid of games hosted by middle-aged men on technologically-obsolete sets; by this point, it had already killed Concentration, The Who, What or Where Game, and Three on a Match), she had gotten her bosses to commission Wheel despite test audiences not being too fond of it by placing her job on the line. The Jeopardy! contract, scheduled to expire in January 1976, was terminated with the remaining year given to Wheel.

Wheel remained a network staple despite two cancellation attempts in 1980 by Silverman and despite changing announcers, hosts, and hostesses. Ratings fell during 1982-83, but the success of the nighttime show helped return it to a run even with (and sometimes beating) the first half of The Price Is Right through 1988.

By the time Rolf Benirschke took over on January 10, 1989, Price began to add viewers while Wheel remained constant in those it had already. While Wheel remained a solid #2 among daytime network games, it was a distant second and so NBC and Merv were unable to come to a license fee agreement. The cancellation announcement was made on May 22 with episodes to air through June 30, only for CBS to announce its renewal on May 23.

January 14, 1991 saw the return of Wheel to NBC, replacing a short-lived revival of Let's Make a Deal. By this point, however, the genre was on a downside that eventually resulted in Price being the only daytime network game for 15 years and Wheel had long since lost the ratings it had two years earlier; nothing it did (including at least three play-by-phone contests) worked, and the show continued to skew older than most advertisers were looking for.

Several NBC affiliates across the United States carry the syndicated version to this day; KNSD in San Diego is the only one that is an O&O.